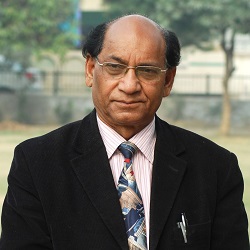 Kunwar Bechain was born on 1 july 1942 in village Umri, District Moradabad, Uttar Pradesh. His real name is Kunwar Bahadur Saxena and he worked as head of the Hindi department in MMH College, Ghaziabad. He is considered as one of the legendry poets and lyrisct of his era. His couplets, Ghazals, and muktaks are often quoted in different kavi sammelans while hosting the show around the world. He has published more than 50 books and his poems are included in many Hindi textbooks of the world. A down to earth poet Kunwar Bechain has travelled the world with his poetry and has left a mark of Indian traditional poetic culture. He is also known for using modern words in his writings and still active in kavi sammelan industry at this age. He has been a part of kavi sammelan for more than 50 years and has touched millions of hearts around the globe.